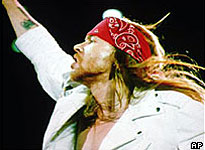 In case you missed this one…

from Billboard Magazine in March:

Many have tried, but so far nobody has been able to pry the decade-in-the-works Guns N’ Roses album “Chinese Democracy” from the hands of lone remaining original member Axl Rose.

Now, Dr Pepper thinks it’s up to the challenge. The soft drink company says it will give a free can of Dr Pepper to “everyone in America” (excluding ex-GNR members Slash and Buckethead) if “Chinese Democracy” arrives anytime during the calendar year 2008.

Well, it’s finally happening. It’s been announced that the album, lying in waiting since 1994, will finally be released this Sunday. And to celebrate, Dr. Pepper is honoring it’s word.

“We never thought this day would come,” said Tony Jacobs, Dr Pepper’s vice president of marketing, reports the Associated Press. “But now that it’s here, all we can say is: The Dr Pepper’s on us.”

A voucher for the free drink will be made available on drpepper.com for 24 hours this Sunday at 12.01am. Those who print the coupon will have until February 28, 2009 to redeem it.

Awesome. and pretty awesome publicity for all parties involved. While I’m curious to see how many people actually utilize the coupon offer, I think the word of mouth response will be the big winner, as I’ve already heard people buzzing about it – and not just on-line.

This entry was posted in advertising, branding, Celebrity, food, music. Bookmark the permalink.